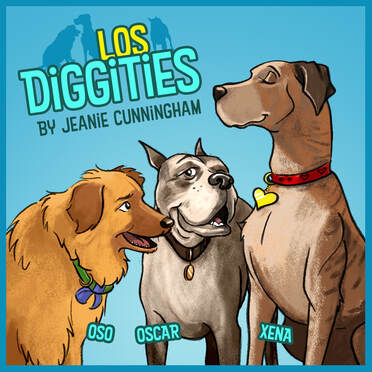 BOOK SERIES
​Los Diggities is a series of stories about 3 rescued dogs who become the best of friends.  They share life lessons with each other and with the reader, using humor and experience to teach morals and values without being ‘preachy’.
Think ‘Flawed Dogs’ meets ‘The Incredible Journey’ with a touch of ‘Goofus and Gallant’ (from Highlights magazine) and you’ve got a general idea of who and what Los Diggities are about!” 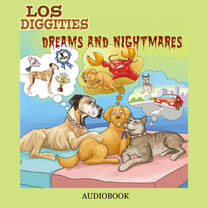 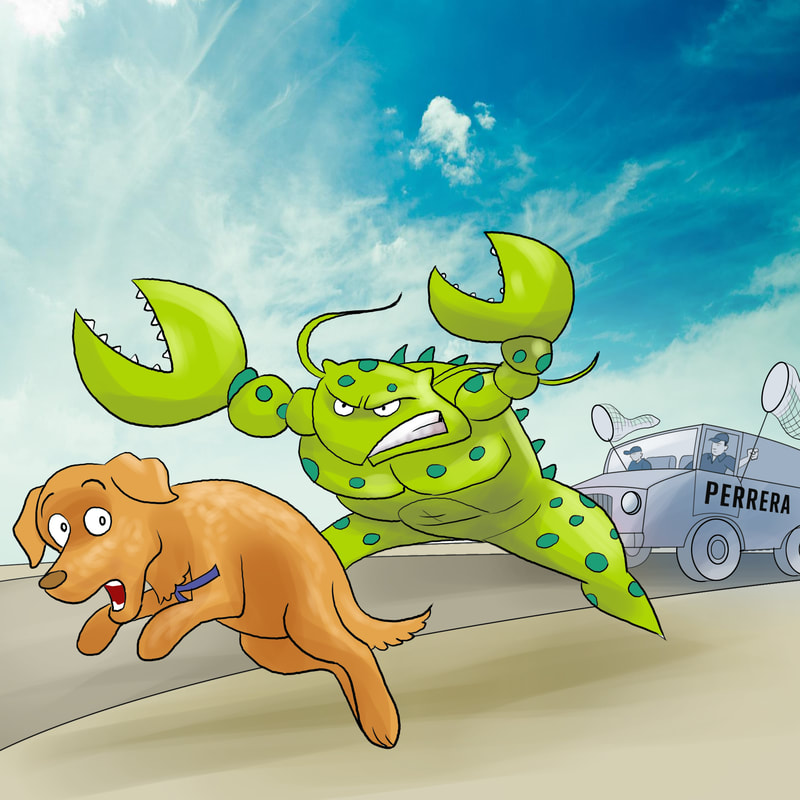 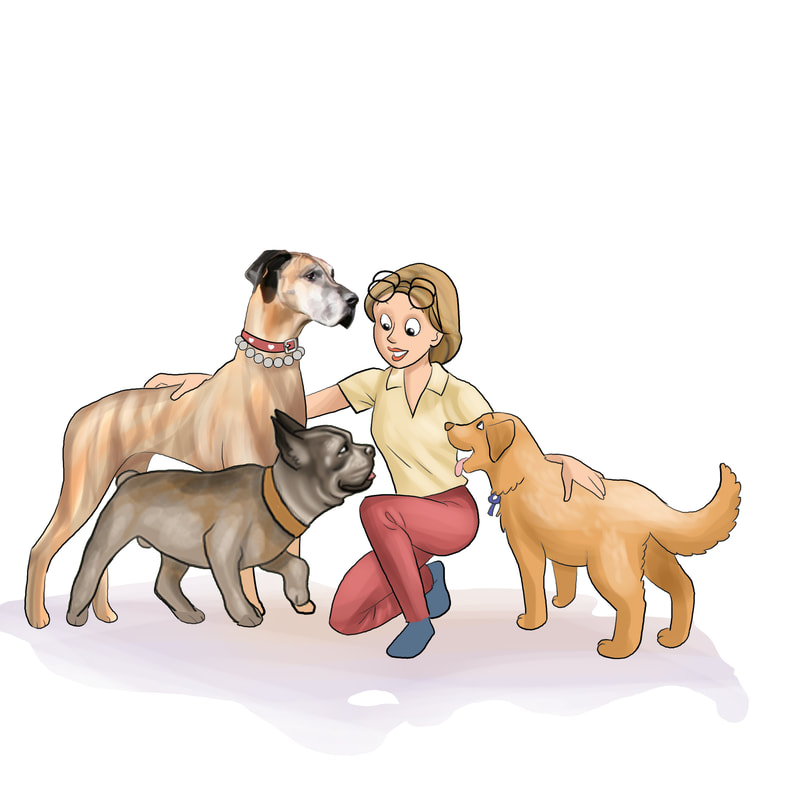 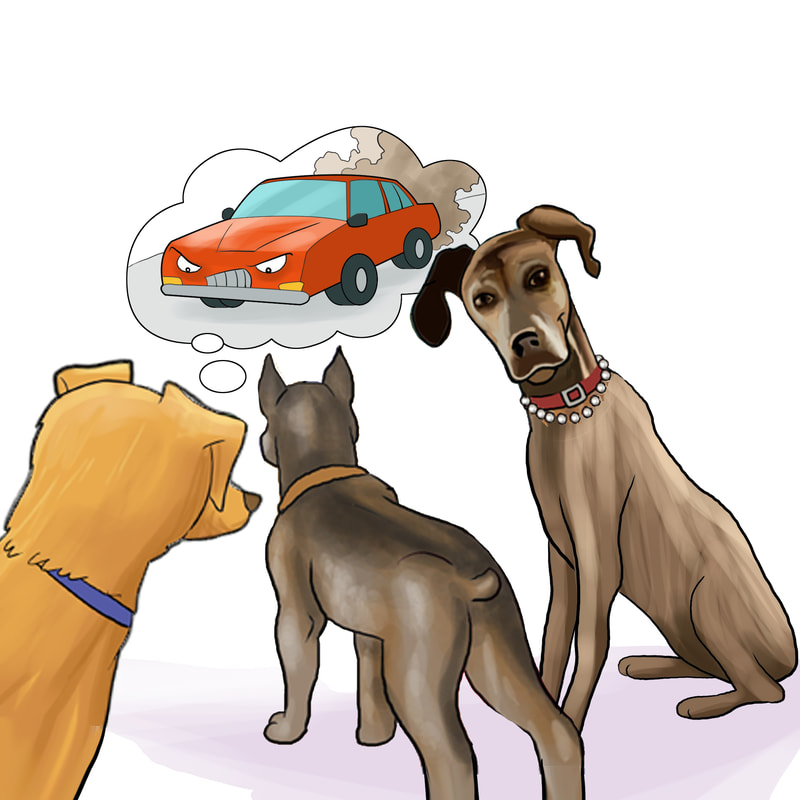 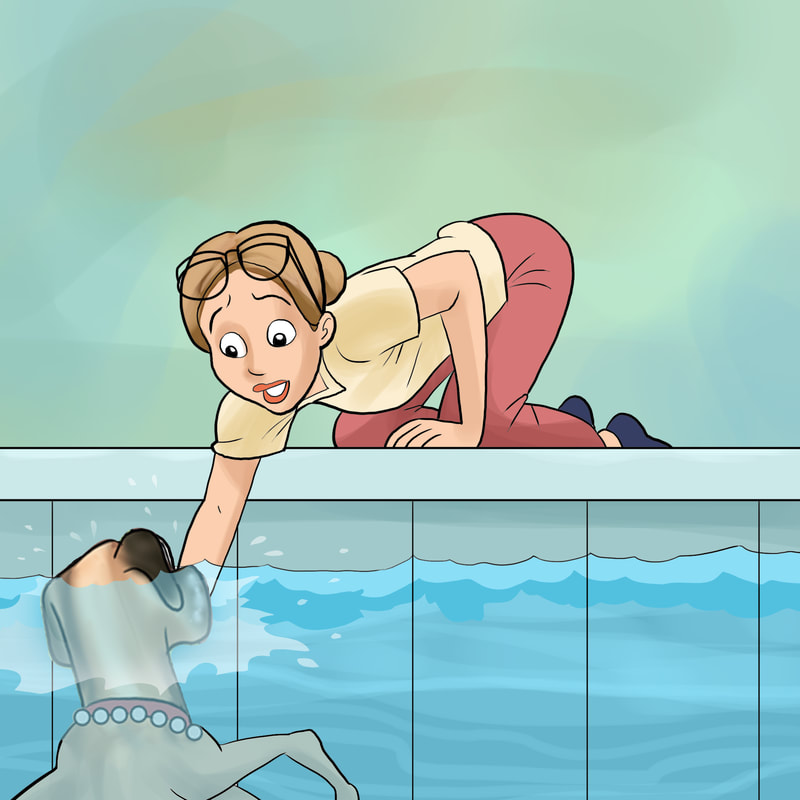 We all dream when we sleep - whether we remember our dreams or not. Sometimes we also have nightmares with visions of horror that stay with us for days. We're not alone.

​As Oso discovers, no nightmare can haunt you for long when you're surrounded by loving friends who understand.... 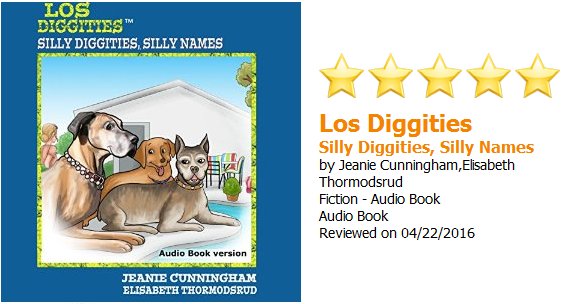 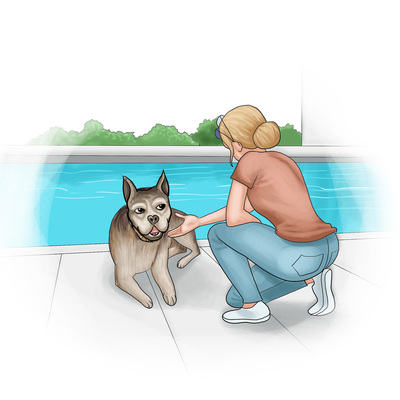 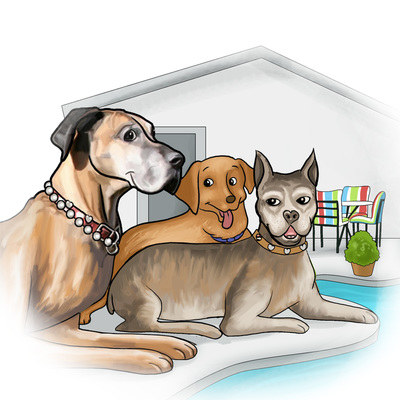 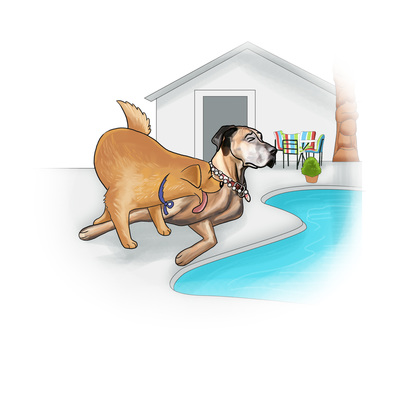 The three “Los Diggities”, Xena, Oscar and Oso, are gathered around the pool one day enjoying the sunshine and an occasional game of tag when the conversation turns to Jeanie’s habit of giving playful nicknames to each of them.

“How did we end up with such silly nicknames and why doesn't Jeanie just settle for ONE name for us and maybe like ONE nickname? She's got at least three for me that I know of," said Xena.

"Si!" said Oso. "Between my parents and Jeanie, I'm probably up to six nicknames myself. Why do they do that to us?"

"Because they love us", said Oscar, who was circling over a new area to lie down on. "We, on the other hand, use these names to get on each others' nerves. As you can see, Oso is an expert at that..."

Jeanie, (Oscar and Xena’s human “mom”), is loving and takes very good care of them but is a little on the “wacky” side and sometimes, those nicknames can be a little, well, embarrassing: “Bo-Beans”. “Wigglebutt”. “Hairy Bellyfonty”.  This is love?

“Silly Diggities, Silly Names” explores the difference between names given in love and names used to hurt others’ feelings. Do YOU have a nickname too?

Click here to read and listen to an excerpt from  SILLY DIGGITIES, SILLY NAMES 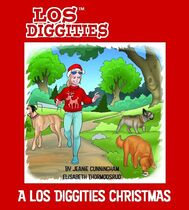 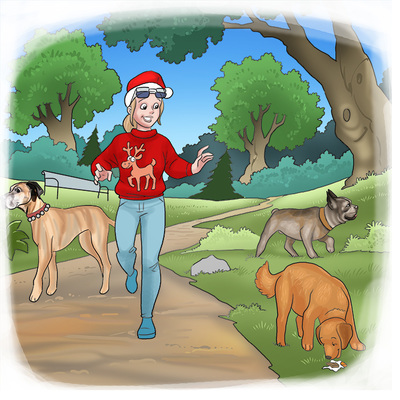 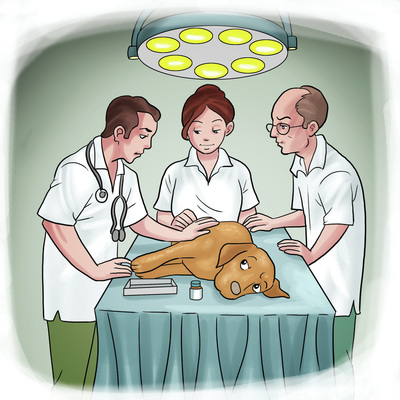 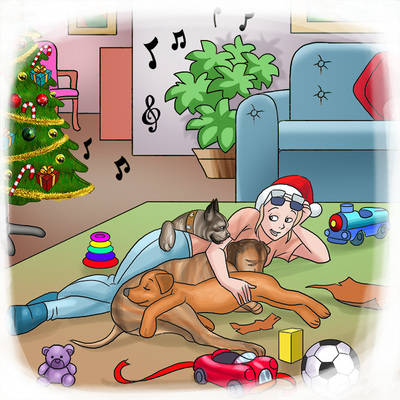 Eighteen-month-old Oso, the youngest of the Los Diggities pack, is captivated by the lights, music, and especially the delicious scents of his first Christmas with Xena, Oscar and their zany human, Jeanie. He even has his own Christmas stocking.

On their Christmas Eve walk, he discovers a chocolate wrapper and tastes it-much to Jeanie's horror. "Never eat anything you find while out on a walk, especially chocolate!" she tells him, taking the wrapper from his mouth and tossing it in the trash. Despite Jeanie's warnings, Oso finds a box of chocolate covered fruits and nuts underneath her Christmas tree. It smells so delicious that he can't resist breaking into it. But after devouring the last piece, he begins to feel really strange. What happens next threatens to not only ruin the Los Diggities' first Christmas together, but could cost Oso his life. Will he survive? What can Jeanie do? And how can Xena and Oscar celebrate Christmas without their best buddy, Oso?

A humorous, heart-warming story (and lesson) for kids of all ages, "A Los Diggities
Christmas" describes what happens when Oso ignores the warnings of those who love him, follows his nose into trouble, and ends up in a life-threatening situation. It provides insight into the kinds of foods that, while perfectly fine for most humans, can be fatal to dogs. 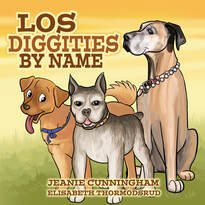 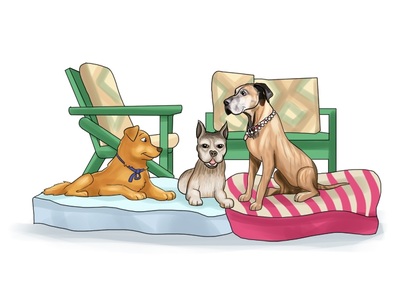 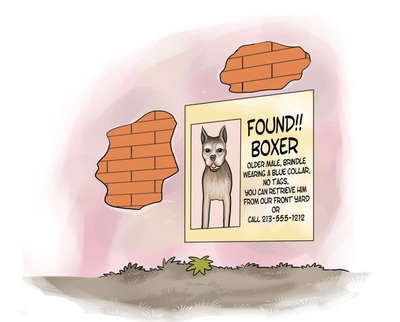 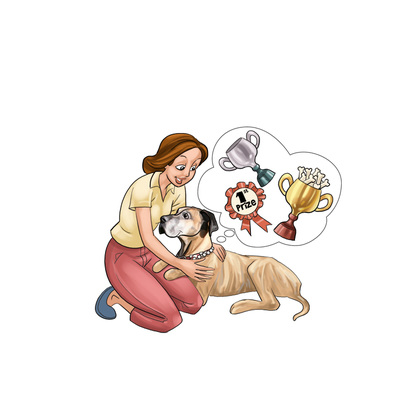 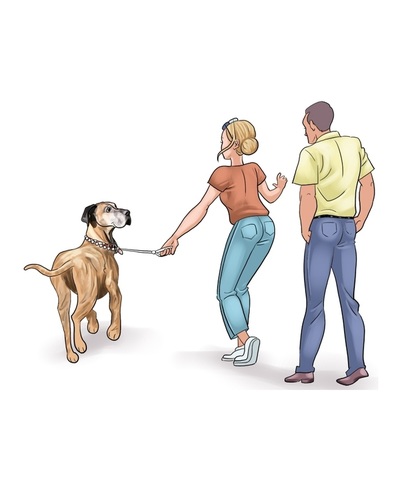 One day on the porch of her “new home” in the hills of Los Angeles, XENA, a rescued 7 year old brindle Great Dane, opens a conversation with her 2 best friends, OSO (an 18 month old rescued Golden Retriever/Chow mix) and OSCAR (a 10 year old rescued Boxer) with the question, “Like, how did we all get here to Los Angeles?”

Xena had originally started out as a potential show dog—or at least that’s what she had been told by her first owner.  Born and raised in “the Valley” of Chatsworth, California, she speaks with a “Valley Girl” accent and carries herself as a Princess.  Due to mysterious circumstances, at the age of 19 months she was taken from her pampered life and left at a rescue shelter.  Within 2 weeks there, she is completely heartbroken and stops eating.  Enter JEANIE, her wacky, eccentric new human, who sees the beauty in this poor, skinny creature and brings her home with her.

Oso, at the tender age of 4 months, narrowly escaped the clutches of evil dog catchers in Cabo San Lucas.  His mother and 5 brothers and sisters were not so lucky, however. Born on the streets, he and his siblings enjoyed the freedom of living off of the good graces of humans and their garbage cans until the day the dog catchers came and took all but Oso away. He recounts with sadness and guilt the harrowing memories of hearing their cries as they were being driven off to uncertain futures in locked boxes.  Rescued by a young couple (SAUL and REBECCA), their two young daughters (HANNAH & MARIE), and their cat (SUSHI)—he is brought to Los Angeles where he now lives directly across the street from Xena and Oscar.

Oscar is a brindle Boxer who’d been abandoned in a park miles from his home just after he turned 10 years old.  He was rescued by Xena and Jeanie while they were out on a walk early one morning and now lives happily with them.  Jeanie, their human, is a gentle lady with a crazy sense of humor and a heart of gold, though many—including the dogs—consider her slightly “out there”.

The three pals now describe their sorrowful pasts with one another and then decide to form their own pack as “Los Diggities ™”.  Joyful in their new homes and friendships, Xena the “Princess from the valley”, Oscar, the “wise old sage”, and Oso, the young, reckless “puppy”, vow to always “stick together as friends forever”.

Book One, “Los Diggities ™ By Name” is the beginning of their many adventures and lessons learned together—lessons and adventures meant to be shared with young children and their families and friends alike!
Click here to read and listen to an excerpt from  Los Diggities by Name